How do you know if someone is suffering from mental illness?

Mental Illness: When and what symptoms should be seen by a doctor:

Mental illness is one of the growing problems nowadays. Studies have shown that about 30-35 people in developing countries like America are affected by this problem. Currently, this problem is spreading very rapidly in the Indian subcontinent as well. But lack of public awareness is pushing the disease to a critical point.

Mental illness can occur at any age. This disease is not rare nowadays even in children. Diagnosing mental illness is one of the most complex procedures in medical science. Because no one type of disease can be diagnosed with any specific symptoms or signs. Currently, with the help of advanced treatments, efforts are being made to make the disease less noticeable. At least the family members of the sick person can recognize some early signs that indicate mental illness.

Scientists have classified more than 200 types of mental illness. Various mental disorders are caused by situational stressors, genetic factors, biochemical imbalances, or all of these. Some of the most common and well-known mental disorders include anxiety, depression, dementia, bipolar disorder, schizophrenia, etc. Symptoms include changes in mood, personality, habits, and social habits. To deal with any mental problem, it is necessary to first recognize the problem. Before that, it is necessary to identify the symptoms of the problem. It is said, “When the mind is hurt, the body also cries”. When an unstable state arises in the mind, it manifests in various physical symptoms.

This report will discuss some common symptoms: 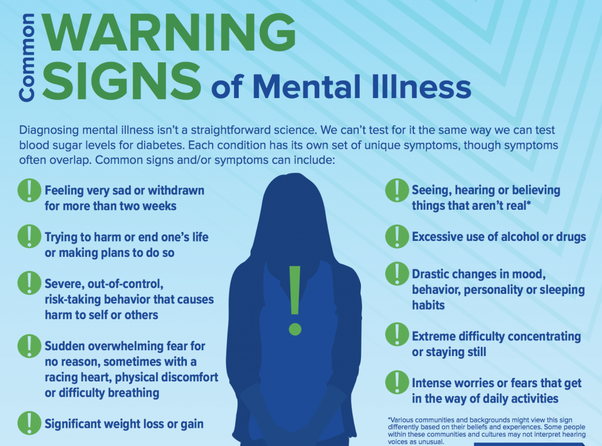 1. Feeling sad most of the day.
2. Reluctance to do daily tasks. Not being able to do anything properly.
3. Lack of concentration. Lack of concentration in reading, writing, or other tasks.
4. Futile, unrealistic, and excessive worrying.
5. Having excessive, unrealistic fears or misgivings about anything.
6. Frequent excessive and unreasonable mood swings.7. Creating social distance. Reluctance to communicate with family, relatives, and friends.
8. Feeling unusually tired, feeling sick.
9. Tendency to deny reality. Hallucinating or having delusions.
10. Tendency to retreat from everyday problems, trying to ignore problems and run away.
11. Not understanding the real situation.

12. Damage or vandalism with symptoms such as restlessness, delirium, and aggressive behavior.
13. Reluctance to eat. or overeating.
14. Excessive weight gain or weight loss.
15. Body aches. Such as headaches, pain in hands and feet, etc.

16. Decreased or increased sexual desire.
17. Insomnia or tendency to oversleep.
18. The attraction of taking drugs is getting old.
19. Suicidal tendencies. or attempt to harm oneself.

It should be remembered that any one or many of these symptoms in combination reveal symptoms of different diseases. No single symptom is considered a symptom of a disease. Even if a symptom appears due to a temporary event, it does not indicate mental illness. Long-term and specific manifestations of symptoms indicate a disease.

So it is very important to pay attention to everyone from the youngest to the oldest member of the house. If one ever changes his normal behavior and no exact reason can be found behind it, then one should not delay in consulting a psychiatrist. Mental illness, like physical illness, is a natural response and, above all, recovery is possible with the right treatment.

Psychiatrists say that as the human mind is happy, it can also be bad at times. But if moodiness or depression persists for a long time then mental health needs to be addressed.

Dr. Sarkar says, “All of us can get upset at times in our lives. But it’s not meant to be for long or long. Or in a better case, the news is supposed to be better. But if there is continuous depression or depression for more than two weeks, then it should be considered as a symptom of mental illness.”

Depression is considered an important mental health problem. Because if it is not given proper attention in the beginning, it can create serious problems. Many understand depression as depression.

“If you are suffering from depression, you don’t feel good even if you go outside the house, office, or favorite places. No matter how good things happen, go to favorite places, then bad feelings do not change. Then it started to affect the mutual relationship.” Says Dr. Govt.