Deeper truth did Hitler teach us about life!

The untold Love story of Hitler

“Hitler got married, did the party and shot himself “

•From April 25, 1945, Hitler’s life had only one objective – preparing himself for his death 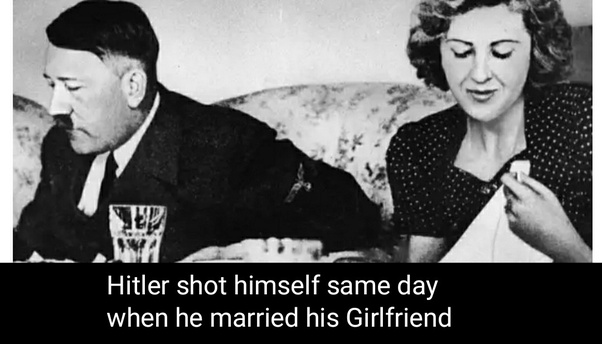 On 25 April, he called his bodyguard Heinz Linge and said, “As soon as I shoot myself, you take my dead body to the Chancery garden and set it on fire. After my death no one has seen me, Nobody recognizes me. After this, you go back to my room and collect my uniform, paper, and everything that I have used, and come out and set fire to it. Only the Anton graph You don’t have to touch the oil painting of Frederick the Great, which my driver will take out of Berlin safely after my death. “

-In the last days of his life, Hitler worked and slept in a bunker built 50 feet below the ground. He used to go to the Reich Chancellery (garden ), only to get his favourite bitch Blondie exercised, where the wreckage of the broken buildings collapsed by bombs all around.

•On April 22, 1945, Hitler said to Eva that if you want you can go out of Berlin, then his girlfriend Eva Braun said, ‘You know I will not leave you and go somewhere … I will stay here.’

•Hitler’s secretary, Traudl Junge was with Hitler in the bunker until the last moment. Once speaking with one newspaper he said, “The last ten days were really like a nightmare for us. We were hiding in the bunker and the Russians were coming close to us. We heard the sound of their firing, bombs, and gunshots.

In the last weeks of his life, Hitler’s condition had become such that he could only be moved with pity. His whole body was shaking and his shoulders were bent. His clothes were dirty and the biggest thing was that his attitude towards everyone was very cold.

•During his last days in the bunker, Hitler decided that he would marry Eva Braun and give legitimacy to that relationship.

•In his book ‘The Life and Death of Adolf Hitler’, Robert Penn writes, “Hitler’s signature on the marriage certificate looked like a dead insect. Eva Browne wanted to write her first name, Brown. He also wrote ‘B’. But then they cut it and then wrote Eva Hitler Brown.

•Everyone jammed for Eva Hitler’s health. Eva drank a lot of champagne. Hitler also took a sip of champagne and started talking about the old days when he attended Goebbel’s wedding. Then suddenly his mood changed and he said, “

On the last day of his life, Hitler slept for a few hours and was refreshed. It has often been seen that prisoners who are sentenced to death sleep peacefully the night before their death.

Robert Penn writes, “Hitler called Professor Hasey to ask if cyanide capsules could be trusted? Professor advised that he should be tested on his beloved bitch Blandy. After the trial Hasey gave Hitler Reported, ‘The test was successful. It did not take more than a few seconds for Blondi to die. “

After the meal, Hitler finally came to meet his comrades. He shook hands with them without looking at their faces. His wife Eva Braun was also with him.

Then both of them went inside the room. Just then, a loud noise was heard. Magda Goebbels came screaming to the door that Hitler should not commit suicide. Standing just outside the door, Heinz Linge did not know when Hitler shot himself.

Then Borman ordered to open the door of Hitler’s room, Eva Brown lay on the sofa and her knees bent to the chest. He was wearing a thick blue dress, she might have spread his hand while dying, due to which the bouquet kept there had fallen.

After this, Lingay wrapped Hitler’s body in a blanket and brought it to the Chancery garden above the emergency door. Boorman raised the body of Eva Braun in her hands.

This scene was seen by all the companions of Hitler’s last days through the door of the bunker. As soon as their dead bodies were set on fire, everyone raised their hands and said ‘Heil Hitler’ and returned to the bunker. At that time there was a strong wind.

In the end, only those people will be with you, who truly love you

No matter, how powerful you are, the fear of death changes everyone.