Really radiation can give humans mutant powers like in comics?

Let me tell you something the doctors never tell anyone.

In our curriculum, we are secretly taught how much radiation, what powers can one get.

But these are not tried ever in humans because of side effects.

BULLSHIT. RAD IS NOT EVEN THE SI UNIT OF RADIOACTIVITY.

But what can radiation give us?

Can radiation really give humans mutant powers like in comics? Absolutely not. Radiation can have any of three effects on living things:

When it comes to mutation, we are only concerned about #3.

When chromosome damage occurs in somatic cells (that is, any cells except eggs and sperm), it also has one of three effects: 1) nothing, or 2) the damage gets repaired, or 3) broken cell metabolism.

The latter amounts to tissue damage, because it screws up the proteins and enzymes the cell is making, or screws up the genes that regulate the cell. The most likely result of this is that the cell dies, and when this happens to a large number of cells all at the same time, we call it radiation sickness.

If you recover, it means all the most severely damaged cells have died, but those that remain have a small chance of going wrong in the future, the biggest effect of which is an elevated lifetime risk of cancer.

All of this is also true when chromosomes are damaged in gametes (sperm and eggs) and again, the most likely result is that the damaged cells will simply die. If they don’t, there is a chance that mutations may affect the development of future generations, but this doesn’t mean what you think it does.

Why? Because contrary to widespread misapprehension, the vast majority of mutations are harmless. Most biological processes are highly immune to variations in the exact form of most proteins and enzymes, and sexual reproduction ensures that we all carry two copies of most of our genes, so even if one copy isn’t up to snuff, the other can generally pinch-hit.

When most people think of mutation, they think of three-headed cows and other monstrous developmental defects, but in fact, most of these are just that—developmental defects. Genetic mutation can sometimes cause such profound and obvious deformities, but for the most part, such gross errors never survive to become embryos.

So you can put aside your fears that nuclear war will give rise to a race of one-eyed, Tripple-teated boogie-men. That cannot happen. What would happen is that cancer and stillbirth rates would rise for the duration of exposure to the radiation, and otherwise, life would go on as before.

For example, if you have red hair and green eyes in your family and consider that a superpower (it is, right?) then there is a very small chance that exposure to radiation might toggle a control gene and give you a ginger child that otherwise might not have been. But radiation can’t give your child the snake-haired head of medusa—you don’t have the raw materials for such a change in your genome.

There is one superpower that radiation conveys. By increasing the mutation rate, it increases the variation within living populations, and that gives nature more raw material to select from. This can accelerate evolution, but don’t get too excited. You already have an evolutionary superpower that does this—sexual reproduction.

Sex vastly increases the variation within a population and does it without relying on mutation. Radiation will increase the variation among your kids, but equally among simple life forms which—because they breed by the trillions—are better suited to take advantage.

That is to say, radiation favours simple life, it is a superpower for microbes, including those that prey on us.

Let me tell you a real story:

Have you heard of Hisashi Ouchi?.

Due to the tight time constraints, the uranyl nitrate wasn’t prepared properly by the staff with many shortcuts being used to achieve the tight deadline. One of these shortcuts was to handle the highly radioactive produce by hand. During their handling of the radioactive produce while trying to convert it into nuclear fuel (uranyl nitrate is used as nuclear fuel) for transportation the inexperienced three-man crew handling the operation made a mistake.

During the mixing process, a specific compound had to be added to the mixture, the inexperienced technicians added seven times the recommended amount of the compound to the mixture leading to an uncontrollable chain reaction being started in the solution.

As soon as the Gamma radiation alarms sounded the three technicians knew they made a mistake. All three were exposed to deadly levels of radiation, more specifically Ouchi receiving 17 Sv of radiation due to his proximity to the reaction, Shinohara 10 Sv and Yokokawa 3 Sv due to his placement at a desk several meters away from the accidents. When being exposed to radiation it is said that anything over 10 Sv is deadly, this would prove to be true in this instance.

During the accident, Ouchi was exposed to 17 sieverts of radiation with 8 sieverts being normally considered fatal and 50 millisieverts being the maximum limit of annual dose allowed for Japanese nuclear workers

Ouchi’s exposure to the radiation was so severe that his chromosomes were destroyed and his white blood cell count plummeted to near-zero. Most of his body had severe burns and his internal organs received severe damage. 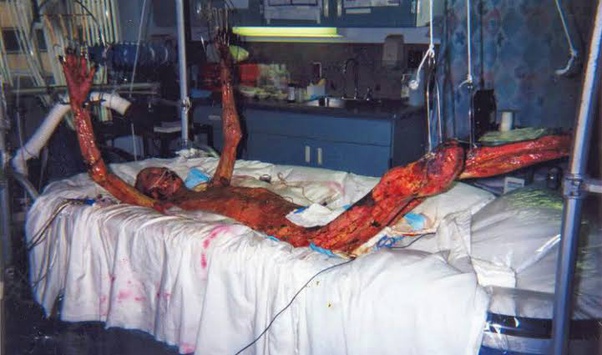 It was cruel that he was resuscitated on the 59th day when his heart stopped three times within a period of 49 minutes, despite wishing not to be let to suffer.

After being treated for a week, Ouchi managed to say, “I can’t take it anymore… I am not a guinea pig”. However, the doctors kept treating him and taking measures to keep him alive, which only ensured a very slow and very painful death.

After 83 days of struggle, Ouchi died of multiple organ failure on December 21, 1999.

He was the only human being ever in history to be exposed to such an amount of radiation at a time.

It was considered equivalent to the hypocenter of the blast of Hiroshima Nagasaki.

So, yeah, let the superpowers attained by radiations stay in the movies, while we continue to wear a lead jacket while operating an orthopaedic case.

This question originally appeared on Quora. Ask a question, get a great answer.